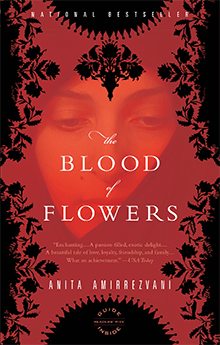 Excerpt from The Blood of Flowers

…After more than a week of travel, we saw the Zagros Mountains, which signaled our approach to Isfahan. Abdul-Rahman told us that from somewhere high in the mountains flowed the very source of Isfahan’s being, the Zayendeh Rood, or Eternal River. At first, it was just a pale blue shimmer, with a cooling breath that reached us from many farsakhs away. As we got closer, the river seemed impossibly long to me, since the most water I had ever seen before had been in mountain streams.

After arriving at its banks, we dismounted from our camels, for they were not permitted in the city, and gathered to admire the water. “May God be praised for His abundance!” cried my mother as the river surged past us, a branch flowing by too quickly to catch.

“Praise is due,” replied Abdul-Rahman, “for this river gives life to Isfahan’s sweet melons, cools her streets, and fills her wells. Without it, Isfahan would cease to be.” 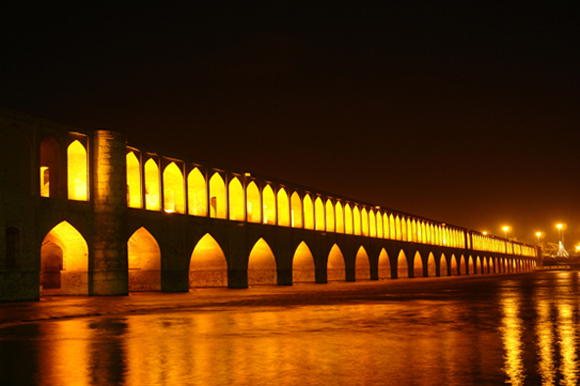 We left our camels in the care of one of Abdul-Rahman’s friends and continued our journey on foot on the Thirty-three Arches Bridge. About halfway across, we entered one of its archways to enjoy the view. I grabbed my mother’s hand and said, “Look! Look!” The river rushed by as if excited, and in the distance we could see another bridge, and another gleaming beyond that one. One was covered in blue tiles, another had teahouses, and still another had arches that seemed like infinite doorways into the city, beckoning travelers to unlock its secrets. Ahead of us, Isfahan stretched out in all directions, and the sight of its thousands of houses, gardens, mosques, bazaars, schools, caravanserais, kebabis, and teahouses filled us with awe. At the end of the bridge lay a long tree-lined avenue that traversed the whole city, ending in the square that Shah Abbas had built, which was so renowned that every child knew it as the Image of the World. My eye was caught by the square’s Friday mosque, whose vast blue dome glowed peacefully in the morning light. Looking around, I saw another azure dome, and yet another, and then dozens more brightening the saffron-colored terrain, and it seemed to me that Isfahan beckoned like a field of turquoise set in gold.